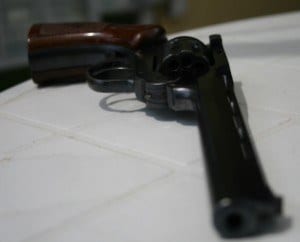 TJ Lane showed no remorse during his sentencing.

What’s a few life terms in prison to Ohio teen shooter T J Lane? A joke, apparently. The teen who is responsible for three deaths at Chardon High School in 2012 received a triple life sentence without parole today. As family members of the victims rose to the podium to read their grievances, the 18-year-old smirked and laughed as they tearfully carried on in their hopes for him and the memories of their loved one.

TJ Lane sat in court surrounded by dozens of officers wearing a white t-shirt that read “killer”. He wore the shirt under a blue button-up which he removed after entering the courtroom. The parents and siblings of victims Demetrius Hewlin, 16, Daniel Parmertor, 16, and Russell King Jr., 17, read their statements in court. The sister of Russell King Jr. mentioned that her brother felt sorry for TJ Lane and had told his friends that he wanted to hang out with him again.

TJ Lane didn’t seem phased by the gestures of sympathy nor agony. He laughed as the mother of Daniel Parmertor spoke:

“I will never be the same because of him…My children look at me and do not see the same mom they used to know,” she said.

The victims families interrupted themselves many times as they reacted to TJ Lane’s lack of remorse, calling him a “monster” and an “animal” that deserves to be locked in a cage and kept away from society.

In his statement TJ Lane gave the middle finger after saying:

“This hand that pulled the trigger that killed your sons now masturbates to the memory. F— all of you.”

Judge David Fuhry said TJ Lane was of his sane mind when the shooting occurred. The judge added that though TJ Lane attended an alternative school for troubled students, he was set to graduate early.

One of the three student who survived the February 27 shooting was also in court. The paralyzed victim’s mother asked TJ Lane why he did it. The teen killer continued to smile.