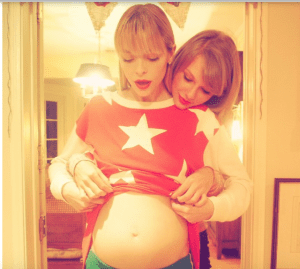 Taylor Swift has earned many awards throughout her career to date. Most recently, the singer-songwriter took home her first BRIT award during the award show held on Feb. 25 where she opened up the show with an unforgettable performance of “Blank Space.”

The “Shake It Off” singer was crowned the best International Female Solo Artist and in true Taylor fashion she dedicated the win to her pal Ed Sheeran.

The excitement didn’t end there. Taylor took to Twitter on March 1 that she has a very new role to prepare for.

The songstress shared that she will be a godmother to Jamie King’s future second-born baby. She shared the heartwarming news on Twitter with a photo of her holding King’s baby bump with the caption that read, “Guess who just got named Godmother to this little one…. (ME).”

This will be the second child for the Hart of Dixie star, King and her husband Kyle Newmann who broke the news last month. The two welcomed their first child, James Knight Newmann who they welcomed in 2013.