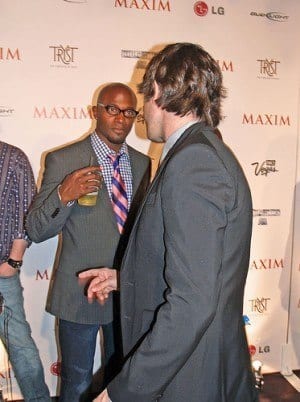 Taye Diggs, 42 captures a 20-year-old burglar in his garage after returning home from SAG awards.

Something’s in the Studio City water

Taye Diggs’, 42, is the second celebrity to tackle a burglar in his home recently. The Private Practice actor found suspect, Hassan Juma, 20, in his home after he’d returned from the Screen Actors Guild Awards on Sunday.

The burglar tried to escape and got several blocks away from the Diggs’ humble abode after being caught in the garage “looking for items to steal” according to CNN.com. But the doctor slash landlord slash casanova caught the perpetrator and held him until the police arrived.

On Sunday, Scott Leo “Taye” Diggs presented the award for “Outstanding Performance by a Female Actor in a Drama Series” and later tweeted “Dee felt bloated, but I had a blast. My favorite part is the dance party afterwards. Dj Paesche kills it and everyone’s on the dance floor.”

Little did he know, he’d soon be taking down a man who came over to “borrow” his tool box.

Hassan Juma remains in jail on a $50,000 bail and Taye Diggs can now rest somewhat peacefully next to his Tony award winning wife, Idina Menzel in their Studio City home.

It is rumored that Hassan Juma was running toward a getaway driver who got away.

LL Cool J, also caught a burglar in the kitchen of his Studio City home in August. The actor and hip hop artist did some physical damage -breaking the burglars jaw and nose- and held the perp until police arrived.