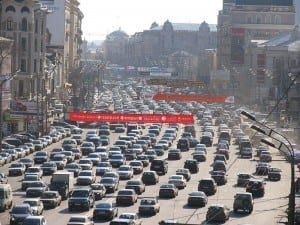 Tax day is nearing, and Beethoven’s Symphony No. 5 (you know, that “dun-dun-dun-duuuun” that plays every time something bad is about to happen) is going through people’s minds for reasons other than facing the daunting task of filing out that confusing tax information.

It turns out tax day is actually killing us. Well, maybe not tax day itself, but a new paper in the Journal of the American Medical Association finds that traffic fatalities rise an average of 6 percent on tax day, compared to similar days.

That certainly brings a new meaning to the inevitability of death and taxes.
The researchers analyzed data from the National Highway Traffic Safety Administration. Stress is thought to be the main culprit causing the abnormal number of traffic fatalities. Polls have found tax day to be the most stressful day of the year.

The researchers write that, “Additional reasons might include sleep deprivation, inadvertent inattention, and less tolerance of hassles.”
While the stress of filing taxes may cause people to want to drink more, increased alcohol consumption is not a likely suspect in the tax day traffic accidents. But alcohol is typically a huge contributor to increases in traffic deaths on other high risk days like Super Bowl Sunday, July 4, and Election Day.

Alcohol is not thought to be a factor on tax day because the number of nighttime traffic fatalities does not seem to increase. Apparently these researchers have never heard of day drinking.

As tax day approaches and you scramble to get all of your files in order before rushing to the post office, be aware of traffic. Allow yourself extra time to get where you are going, and plot your route beforehand if it takes you down unfamiliar roads.

If you haven’t filed your taxes yet, tax day falls on Tuesday April 17 this year.

Previous ArticleElon Musk: Mars is the America of 1492Next ArticleShea Weber Fined for Game 1 Cheap Shot