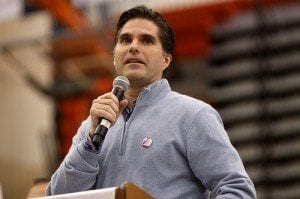 The son of Mitt Romney is frustrated with the campaign

Tagg Romney, oldest son of the GOP presidential nominee Mitt Romney, told a North Caroline radio host that he would like to take a swing at the president.

When asked how it feels to hear his father called a liar, Tagg Romney replied in a joking tone. “You want to rush down the debate stage and take a swing at him. But you know you can’t do that because, well first cause there is a lot of Secret Service between you and him, but also because it’s the nature of the process,” he said according to the Associated Press.

Although Pres. Barack Obama never officially called his opposing candidate a liar, he has said Mitt Romney’s statements are not true on several occasions. With the presidential debates putting the two men against each other and the campaign getting harder, Tagg Romney and the rest of the Romney family are feeling the pressure of such an intense race.

Tagg Romney was brought up in an interview with Josh Romney and his mother Ann Romney on The View Oct. 18. When asked about his brothers off-the-cuff response, Josh put it into prospective by saying his brother has no intention of slugging the president.

“You really don’t like to see your dad get beat up by the media or President Obama or whatever it is, so you take it pretty personally. But I think that was just something he was saying off the cuff and I assure you he didn’t mean it,” said Josh Romney.

In addition to the discussion of Tagg Romney’s remark, his mother Ann discussed the negativity of the campaign and its effect on her family. After not wanted to campaign for the presidency after Mitt lost in the 2008 Republican primary, she agreed to give it a second chance because she believes in her husband’s ability to fix state of the U.S. economy.

When Barbara Walters asked what will happen if he does not win the election, she replied that it would be the end of their political careers.

“Absolutely,” Mrs. Romney said, “he will not run again, nor will I.”