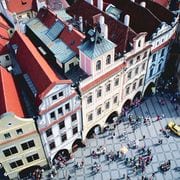 Why are so many people going to Prague and talking about how fabulous it is? Is it centuries of incredible architecture, wonderful music, enticing atmosphere, low prices, or some of the best beer and wine in the world?

All of the above are true! But maybe you can best see by putting a picture in your mind: It is evening. You are walking over a long cobblestone bridge built in the 1300s — the Charles Bridge — which for centuries was the only bride over the river.

All along the bridge are statues of saints from the 1700s, and artists selling their paintings and photography. In front of you are fairy-tale towers from the 1400s and 1500s. There are riverside cafes and bars with people talking and laughing. Beyond them is the green dome of a church where Mozart himself played the organ in the 1700s.

You ask yourself if this can all be real, and you discover to your delight that it is. That fact begins to sink in when  you stop at a cafe and order a cava (coffee) or pivo (beer) and drink it all in.

The trip
We traveled to Prague with a study group for DePaul University, School for New Learning, where all the students are at least 24 years old, many of them working professionals going back for a degree, but including people of all ages and backgrounds.

Our group of 14 made up the class “Prague: And Historic City of Art, Architecture and Music,” which led us to learn a lot about art, architecture and music, but also much more. Students, in addition to writing journals about daily events, were free to branch out into studies of Czech economics, politics, history, religion and other aspects of culture.

New musical experiences
Many in our group had never attended a classical event or an opera before. We went to two fine concerts — both of which included music by Mozart — who loved Prague and visited four times. One concert was in a thousand-year-old church.

We went to two operas: Mozart’s “Don Giovanni” in the same theater where he conducted the premiere, ad Donizetti’s “Lucia di Lammermoor” in the beautiful State Opera House. Everyone found them fascinating.

Some students went to a rock club, of which there are many in Prague. Some went to the biggest disco in all of Europe. Others went to the top jazz club in Prague, Reduta, where President Clinton played the saxophone his visit — there’s a picture on the wall.

We also took the Jazz Boat, which goes up and down the river Vltava, while people eat and drink, admire the famous architecture lit up at night and enjoy the jazz.

We visited the Cafe Slavia, where Czech freedom was secretly planned, and attended the famous multimedia Magic Lantern theater. Some people even went on the spooky nighttime ghost tour.

Daytime adventures
We learned about 1930s Functionalism and Art Nouveau architecture on Wenceslaus Square, and the unbelievable variety of architecture on the Old Town Square , where — just by turning your head — you can see Gothic, Renaissance, Baroque and Rococo architecture.

A few blocks away, there is even Cubist architecture. And Prague has a building, called the Dancing Building, by contemporary genius Frank Gehry.

We took walking tours and boat tours on city history, dined at outdoor cafes, rode the Metro to art galleries, had lunch in a Renaissance courtyard, and walked the Jewish Quarter, which has the oldest synagogue in all of Europe.

Fast history
Prague is in Central Europe, Bohemia, which is a region of today’s Czech republic. For centuries, this beautiful city was part of the Austro-Hungarian Empire, and the official language was German. Charles IV was a great ruler in the 1300s, who built the bridge and the New Town, and established the still-famous Charles University.

Then in the early 1900s, a man with a Chicago connection helped make history: Tomas Masaryk who at one time taught Slavic languages at the University of Chicago. Masaryk was a friend of President Woodrow Wilson, and got Wilson to back the idea of carving a free country called Czechoslovakia out of the old Austro-Hungarian Empire after World War I. This dream came true, and Masaryk was elected President of Czechoslovakia, which remained free from 1918 until Hitler seized it in 1939.

Prague suffered under the Nazis for more than four years, until the Russians rolled in to “save”  them in 1945. But the Czechs then immediately became part of the Soviet block, enduring more than 40 years of slavery under a secretive, repressive communist government known for its spies and arresting people.

Prague tried to loosen things up in the hopeful Prague Spring of 1968, when people led by Alexander Dubcek sought a “socialism with a human face.” But the ugly sight of Soviet tanks rolling in to suppress any reforms reminded the world just how bleak Prague remained.

Finally in 1989 freedom was in the air — and Vaclav Have, a dissident playwright who had been repeatedly beaten and jailed by the communists, led thousands of people in the non-violent Velvet Revolution. Russia backed down, a free country was born and Havel was elected president.

Food and drink
Czech food comes out of the old Empire, with lots of dumplings, pork, chicken and hearty goulash. As things are getting more international, you can do as we did and visit a Chinese restaurant, the vegetarian Country Life, and eat pizza in cellars a thousand years old. Drink bottled water. The fresh beer is some of the best in the world, and the wine is excellent.

Chicago connections
At one time Chicago was one of the biggest Czech cities in the world — Pilsen was a Czech neighborhood. Now many Czech-Americans live in Chicago suburbs. George Halas, founder of Bears, was a Czech-American, as was Anton Cermak, mayor of Chicago.

Before you go
Visit the Savvy Traveler or another good bookstore, and stock up on good guidebooks, including Frommer and Steves.

Buy CDs of dvorak’s “Slavonic Dances” and symphonies, and be sure to listen to the most famous piece of Czech music of all, “The Moldau” by the father of Czech national music, Smetana. Rent Czech filmmaker Milos Forman’s Academy Award-winning “Amadeus,” filmed in Prague.