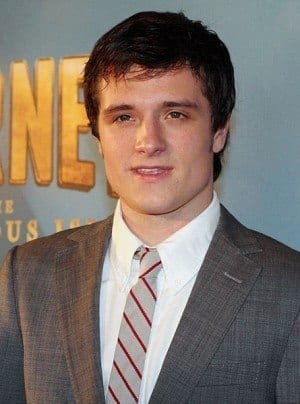 Josh Hutcherson is on the late night circuit talking about everything from going blond to dealing with mega-fame.

Josh Hutcherson, who plays Peeta Mellark in the new movie The Hunger Games, has seen a lot of strange thins since becoming the District 12 tribute.

“We’ve seen some insane signs,” Josh Hutcherson told MTV about his fans, “’Is that a loaf of bread in your pocket, or are you just happy to see me?’ Funny stuff along those lines. Very original. One just said, ‘I will do unspeakable things.’ I thought that was very interesting… and mildly terrifying!”

Josh Hutcherson first made his appearance on the big screen in the films Bridge to Terabithia and Journey to the Center of the Earth. Now, he is the baker’s son who saves Katniss Everdeen and is later saved by her.

Josh Hutcherson said he is excited about playing the role of Peeta.

“I think that over the course of the next couple of books, he has so many interesting places to go to, character-wise. I’m ready to dive full-force into it. When I saw the movie actually, it got me energized. Let’s go get some cameras! Let’s go shoot the second one right now,” Josh Hutcherson said.

The second installment of the Hunger Games has not yet started filming, but it sounds like Josh Hutcherson is eager to reprise his role.

Fans of the books weren’t happy with the casting decisions when they were first announced. None of the three main characters had the right hair color or build for their characters, but thanks to the magic of Hollywood, dieting, exercise and hair dye, each pulled off his or her character with style.

Jennifer Lawrence was criticized for her blonde hair as well, but she looked stunning as the brunette huntress shooting arrows and climbing trees.

The Hunger Games stars are definitely receiving more hype than ever before, and there’s still a lot to get used to. After all, franchises like this typically lead to everything from lunch boxes to action figures to life-sized cardboard cutouts.

Josh Hutcherson isn’t just an actor from Kentucky anymore. His face will always be that of Peeta Mellark from District 12.