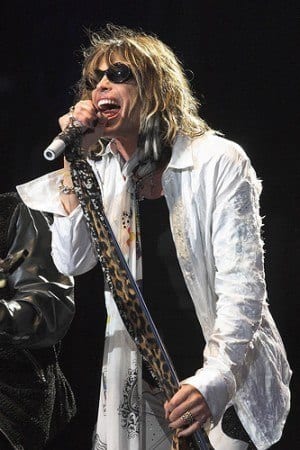 Steven Tyler took a nasty fall in a hotel shower over the weekend, but he’s maintaining that it wasn’t caused by him relapsing.

Spinner reports that Tyler fell in the shower while in Paraguay, resulting in a busted lip, cut forehead and two broken teeth. Tyler spoke with the “Today Show” and assured fans and the press that the fall was not due to substance abuse. Instead, it was due to food poisoning.

“Being in the program, it’s something we have to expect. People thinking that is natural and normal. We flew last night from Paraguay after that incident and [now] we’re in Argentina for two hours. And anyone who knows anyone who uses substances wouldn’t be up at this hour having a talk with Matt Lauer and the rest of America,” Tyler said.

Despite the fall and nasty injuries, Tyler and the rest of Aerosmith are continuing their South American tour and Tyler even managed to play harmonica with his broken teeth.