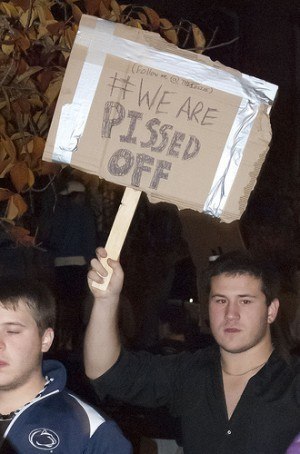 State College, PA filled with student protesters Wednesday night following the announcement that Joe Paterno had been fired amid the college’s molestation scandal.

Reuters reports that students in State College took to the streets, chanting “Hell no, Joe won’t go” and “We want Joe back.” Some students even overturned a TV van during the protest.

Police and state troopers attempted to clear the streets, some employing pepper gas to do so. It is unclear whether any arrests have been made.

Penn State assistant coach Jerry Sandusky, 67, was charged with sexually abusing at least eight young boys over the period of a decade. Paterno, 84, and Penn State University President Graham Spanier were fired by Penn State’s board of trustees late Wednesday. Paterno was made aware of the accusations in 2002. “I wish I had done more,” he said Wednesday.