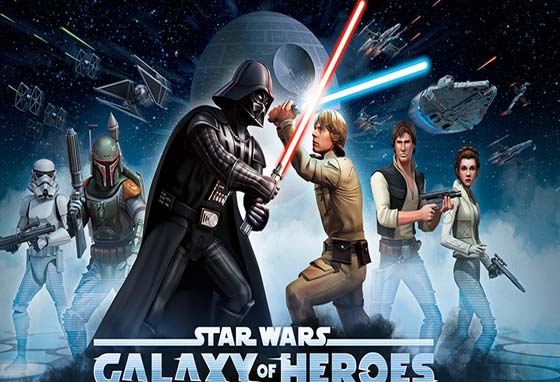 The Star Wars Galaxy of Heroes app is the perfect app for Star Wars fans. Gaming’s mobile marketplace is an ever-evolving organism filled with a variety of games that appeal to a multitude of players. Rarely will you find an app that uses a license that is so recognizable that, regardless of who sees it, nearly everyone will take a second glance. Appearing on iOS and Android, Star Wars Galaxy of Heroes is exactly that app.

Like many free-to-play games, Heroes uses microtransactions to help fund the game and, for the sake of assisting with the review, $100 of in-game currency (called Crystals) was provided. Speaking toward how well designed and enjoyable the game is, an additional $75.00 was spent — with inevitably more to come — as I continue to play the game on my own, with no additional coverage expected.

Aside from the simple point that the Star Wars license is eye-catching, particularly with the newest movie in theaters, there are a number of positive reasons with Heroes is worth your time and, to an extent, your money. The gameplay mechanics are rather straightforward and offer very little variation, but everything mingles together to give players a great “carrot-on-a-stick” experience, while also letting them feel powerful and providing as much entertainment as you care to find.

It’s worth noting that the support available to players is impressive. On the game’s forums and even within its own subreddit, game developers and moderators interact with players to find out what’s working, what’s not, and actively communicate (as best as they can) to actively acknowledge known issues. And while the image of support is there, individual technical issues are handled in a reasonable amount of time as well.

During my time playing, I encountered a technical issue that resulted in me not unlocking Darth Vader when I should have. The initial call was indeed frustrating — I was passed back and forth between the same two departments four times — when I spoke to the final customer service representative, I was assured that I wouldn’t be transferred and someone would be getting back to me instead.

Surprisingly, they did, and my issue was corrected.

Support experiences aside, the gameplay itself sees you forming teams of five characters from within the Star Wars universe and battling through varying modes, including form of player-versus-player. The combat is turn-based and to maximize your chance of success, you’ll want to pair characters with others that supplement their particular styles. The only character position that matters is your team’s leader, as they add bonuses to the entire team.

You will also like: Gaming gift guide recap for 2015

One gripe, echoed amongst the community of players, is the game’s take on “microtransactions”. While you can purchase crystals, which have a number of uses (including potentially unlocking high level characters), the character packs themselves are priced well above anything that could be considered “micro”. Initially there’s a $4.99 pack that is reasonable, but after that you’ll see prices ranging from $17.99 to $99.99. Because the crystals don’t guarantee you a particular character, or any character at all for that matter, saving them is your best option, which makes the pricing of character packs even more frustrating.

Additionally, there are various game “currency” and different types of “energy” which you’ll use to embark on different conquests and earn different rewards, as is common with games like this. As you get deeper into the game you’ll find that two modes in particular, player-versus-player and the Keycard Battles, have frustrating rules or weak rewards, which means many will skip those options altogether, cutting out two slices of the game immediately.

There’s an enormous stable of characters from varying time periods and they all appear in the movies or cartoons, so you won’t end up staring at a character that isn’t familiar to someone. Star Wars Galaxy of Heroes isn’t difficult to play, but learning character nuances and which teams synergize well is difficult. The community itself has dedicated hours to helping each other directly or through fan-made databases, a testament to the draw the game has.

Overall, Heroes is a great experience superficially, used only to waste small amounts of time, or deep, with hours and hours of planning. It’s not necessary to spend money to have fun, but unless you’re lucky (or incredibly efficient), you’re going to be behind those who pay at nearly every stretch.

Some parts of the game need better systems in place for advancement and balance, something the development team has acknowledged, but there are still no confirmed changes on the horizon. Still, in spite of that, you’ll find yourself enjoying your time whether it’s a few minutes or a few hours.