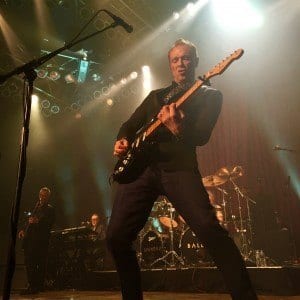 Lil Wayne, Lloyd, Will.i.am, and Fergie, are all thoroughly familiar with the British rock group, Spandau Ballet…and you should be too. All of the aforementioned artists have covered or sampled the group’s ethereal smash hit “True”.

Spandau Ballet’s bassist, Martin Kemp, admitted with a laugh when we chatted a couple months ago, his favorite cover of “True” was not by a musician at all. It was when Ed O’Neill sang it to his onscreen wife, Sofia Vergara, for their wedding anniversary on ABC’s hit sitcom, Modern Family. Kemp recalls watching the episode and feeling pleasantly shocked and  simultaneously proud of the comedic cover.

The song itself debuted in 1983 and spent time getting comfortable on the Billboard Hot 100 charts in the US. The band experienced much success, however, it was short-lived outside of Europe, where Spandau Ballet was becoming known as the all-too-familiar “one hit wonder”. Spandau Ballet continued to perform successfully in Europe but never came back to the America.

Thirty-two years have passed since “True” debuted, and thirty years have gone by since the group has performed in the U.S. Now Spandau Ballet has returned, releasing a new album, ‘The Story’ The Very Best Of by Spandau Ballet and a movie, Soul Boys of the Western World.

We’re in Chicago at the legendary House of Blues. The place is packed and Spandau Ballet is about to take the stage. The air is heavy with anticipation, quite similar to when a couple of old friends are about to see one another after several years have passed.

“Will things pick up where they left off?”

“Will everything be the same? Or different? Maybe different, but in a good way?”

“Is this going to be awkward?”

“Are they going to show me pictures of their kids?”

Spandau Ballet came out  to an eager crowd, skipped the formalities, and began playing immediately. They opened with “Soul Boy”, one of the songs off their new album, which a mix of old and new material.

The group was dressed in the smart formalwear that only seasoned rockstars can pull off; the cool fitted suits of various colors, with funky unbuttoned shirts underneath. Although, in retrospect the outfits were extremely tame compared to the last time the group came to the U.S. in the 1980s [insert over-the-top 80s outfit and makeup here].

The show displayed a delightful journey of Spandau Ballet and the audience acquainting themselves once more after all these years. Any tenseness or awkwardness between the two parties dissipated as the band’s familiar songs and exciting stage presence were quickly recognized by the fans.

The group took a new spin on their second biggest hit, “Gold”, and performed an acoustic version which took some people by surprise. In total the group gave us a little over twenty tunes over the span of two hours, including songs off their new album. They saved “True” for last but when it started to play, it brought the house down.

Everyone loves a good comeback story, after the band’s thirty year hiatus from the U.S., this show was just what Spandau Ballet’s American fans needed, and the payoff was a rich one. Here’s hoping they’re here to stay. Good luck boys!