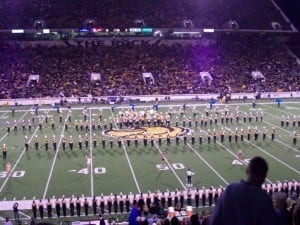 Angel Rodriguez receives apology from Southern Miss president after their band yelled racial chants at him.

University of Southern Mississippi president has apologized on behalf of members of the school’s band began chanting, “Where’s your green card” at a Latino player during an NCAA tournament game on Thursday, according to.

The incident occurred during the University of Southern Mississippi and Kansas State University game, which was aired on TV.

Not throwing off his game, Rodriguez appeared to not be upset during the chants, leading his team to a 70-64 win.

She went on to say, “Any determination of championship misconduct is the purview of the men’s basketball committee and will be addressed following the tournament.”

The president of the University of Southern Mississippi released this statement:
“We deeply regret the remarks made by a few students at today’s game. The words of these individuals do not represent the sentiments of our pep band, athletic department or university. We apologize to Mr. Rodriguez and will take quick and appropriate disciplinary action against the students involved in this isolated incident.”

Rodriguez is a freshman at Southern. He is originally from San Juan, Puerto Rico.

The Kansas State Wildcats win not only beat the ninth-seeded Southern Miss but also knocked them out of the tournament.

NCAA March Madness can be seen on TBS, TNT, truTV and CBS or if you’re not a TV, watch it online here.