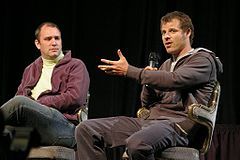 Comedy Central announced that “South Park” co-creators Trey Parker and Matt Stone have signed on to extend the animated series an additional three seasons, through its 20th in 2016.

The network said Wednesday that the duo will continue to write, direct and edit every episode, as they have done since the series premiere in 1997.

According to the Associated Press, Parker and Stone had large success on Broadway with their hit musical, “The Book of Mormon,” earlier this year.

Parker and Stone said in a statement, “Comedy Central has been our home for 15 years and we love working there. ‘South Park’ is a blast and we can’t wait to make more.”