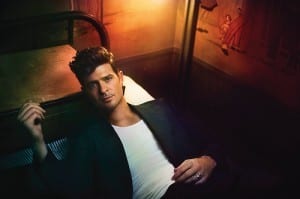 Robin Thicke, who has achieved massive success as a singer and a songwriter, had his song “Blurred Lines” reach the top spot on the Billboard Hot 100, but despite this being his first time reaching the coveted position, his celebration was short-lived. Robin Thicke’s new single and video have drawn ire from critics and fans alike, most notably being described as “rapey.”

Given the current spotlight on rape culture, the song’s lyrics immediately caused controversy, as Robin Thicke spends the vast majority of the tune repeating the phrase, “I know you want it girl.”  Robin Thicke choosing to title the song “Blurred Lines” didn’t help matters either. Then, to top it off, Robin Thicke released the music video, which featured fully-clothed Robin Thicke and T.I. as topless women pranced about in nude-colored underwear with a sheep.

Robin Thicke posted the video to his Facebook page and immediately received waves of negative comments. Even Youtube banned the unedited video, deeming it too racy and offensive to viewers. Other viewers praised the video, citing that the models looked like they were having fun.

Here’s the problem with the outcry: Robin Thicke has always been known for his super-sexual songs, so this one should come as no surprise to fans or critics. The women in the video are adults who willingly accepted a job. The music video itself looks like an American Apparel advertisement come to life and the public sees more nudity on a daily basis from Rihanna’s Twitter feed. The creepiest part of the video is that half-nude people are surrounded by farm animals.

Also, no normal person is going to hear the song or watch the video and think, “Oh, I think I’ll sexually assault someone today.” That doesn’t happen. Bad people do bad things and normal non-deviants don’t. A catchy R&B tune isn’t going to send them spiraling down some twisted path. Everyone should take the song and video for what they are: entertainment. If it isn’t your thing, don’t watch or listen.

As for Robin Thicke, he stands by the production and noted that the song and video are meant to be fun, saying, “To actually finally have everybody paying attention this time is very exciting.”

Previous ArticleIs This the End of the Relationship?Next ArticleMan shot by son-in-law on Father's Day