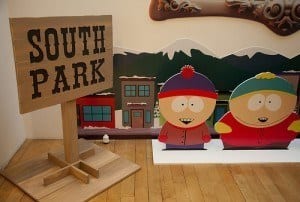 The South Park intro has been a staple for nearly two decades and is instantly recognizable by fans and critics alike. The 30-second intro was revamped for last night’s episode.

Instead of the traditional 2D sequence, creators Trey Parker and Matt Stone opted for a 3D animation. The new video gives more life and dimension to the characters. It also provides a better portrait of the town of South Park, Colorado.

The 3D move is in anticipation of the South Park video game, entitled The Stick of Truth, that is due for release on December 10. The 3D game will be available on Xbox 360, PS3 and PC.

The internet choir of social media critics has come out strongly against the new South Park intro. Die-hard fans reacted with Facebook posts ranging from “I hate the 3D s**t! It completely ruins everything!!,” to “not a fan. Seems like your bloody old Xbox game graphics.”

The rest of the show was animated in the same 2D way that fans are familiar with. The outcry against 3D animation seems to be a bit exaggerated and premature on the part of critics.

Only 30 seconds of the show was changed. The rest is the same, people.

Checkout a clip of the opening sequence below.