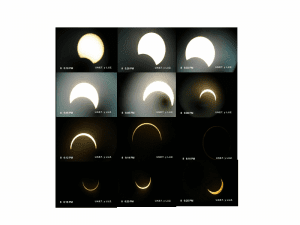 A solar eclipse of the annular kind will occur this Sunday, May 20th.

The Huffington Post gives a great description in the solar eclipse that is scheduled for Sunday, “Annular eclipses are similar to total eclipses in that the moon lines up with the sun dead-on. But in this case, the moon is close to apogee—the farthest point from Earth in its elliptical orbit around our planet—so it’s a smidge too small in the sky to cover the solar disk completely. As a result, a ring of bring sunlight will still blaze around the moon’s circumference.”

Even though Sunday’s solar eclipse will cover most of the sun, it is still dangerous to look directly at it. There are several safety tips out there for watching the solar eclipse with care, and one will make you feel like a kid again. A pinhole projector is an easy way to indirectly watch the moons path, but if you would like to watch it directly, many experts suggest buying a No. 14 welder’s glass.

The solar eclipse is guessed to begin around 5:30 p.m. PDT and is expected to last about four and a half minutes. The Huffington Post gives a timeline of the solar eclipse:

The Huffington Post also suggests the best places to view the upcoming solar eclipse including Joshua Tree, Malibu Canyon, and the Griffith Observatory. Many places in the West are also planning viewing parties.