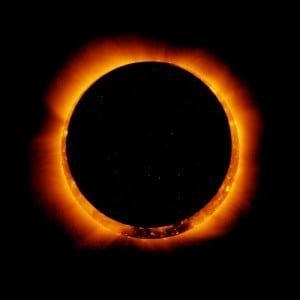 A solar eclipse will block out the majority of the sun on Sunday (May 20) and leave only an outer “ring of fire” blazing high above.

The solar eclipse will be visible from the majority of Asia, the Pacific region and western portions of North America. The event is known as an annular solar eclipse, not annual but instead derived from the Latin “annulus,” meaning “little ring.”

At its peak, the annular solar eclipse will block approximately 94 percent of the light from the sun.

Some parts of the U.S. and Canada will see a partial solar eclipse instead of the full “ring of fire” effect. The eastern coast of North America will not be able to view the event as the sun will have already set by the late afternoon or early evening time that the eclipse is expected to occur at. Viewers in North America can witness the event on May 20; those in Asia can observe the phenomena on May 21.

Observers must be cautious when attempting to view the solar eclipse, putting on a regular pair of sunglasses will not prevent severe damage to one’s eyesight. To safely witness the annular solar eclipse, an observer can buy special filters to fit over their telescopes, or No. 14 welder’s glass to wear over the eyes. If someone does not follow proper safety guidelines while viewing the event, serious and permanent eye damage could be the result, including blindness.

Interested parties can view locations and times where the eclipse can be seen at the eclipse skywatching guide.