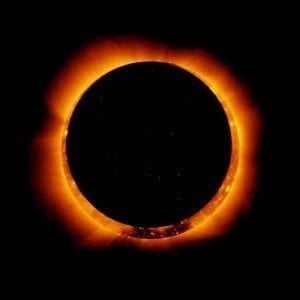 The amazing astronomical event can be witnessed by many, from east Asia to the western United States

A solar eclipse will occur Sunday May 20, causing the moon to block out all of the sun except the corona in what is known as an annular solar eclipse.

The solar eclipse ought to be visible for many across the globe, barring cloud-cover, from Asia to North America.

The event takes its name from the Latin word “annulus,” meaning “little ring.” It should not be confused with the similar but starkly different “annual” as solar eclipses are far from common, let alone annual.

At its peak, the annular solar eclipse will block nearly 94 percent of the sun’s light from reaching earth.

Barring the cloud-cover that ruined witnessing parties across Los Angeles in January of 1992, the annular solar eclipse ought to be visible in the majority of Asian and Pacific nations and across the western coast of North America. Some parts of the U.S. and Canada will only be able to see a partial solar eclipse instead of the full “ring of fire” effect. The eclipse will not be visible for those on the eastern coast of the U.S. as the sun will have already set by the late afternoon or early evening time that the eclipse is expected to occur at. For those in North America the event will occur on May 20. Viewers in Asia can observe the phenomena on May 21. In Los Angeles, the eclipse will begin at 5:24 p.m. and end at 7:42 p.m., climaxing at 6:38 p.m. For a complete list of viewing times and locations interested parties can visit the eclipse skywatching guide.

It is important to note the danger possible from witnessing the amazing astronomical event without proper eye-protection, putting on a pair of regular sunglasses simply will not help. Witnessing a solar eclipse without eye-protection can lead to serious and permanent eye damage, including blindness. To safely witness the event, an observer can purchase special filters to fit over their telescope, or No. 14 welder’s glasses to wear over their eyes. More information on the annular solar eclipse can be found here.