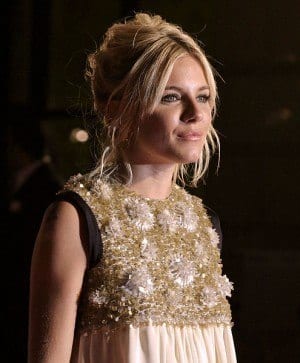 Sienna Miller, never one to discuss her private life with the press, has yet to officially announce her pregnancy. She did, however display what is undoubtedly a baby bump last night at “W Magazine’s” Ever Changing Face of Beauty event.

Last week, the 30-year-old actress was photographed leaving Groucho Club in London, wearing what appeared to be an engagement ring. Rumors of an engagement to British actor Tom Sturridge are unconfirmed. Miller walked the red carpet solo last night and was not wearing the supposed engagement ring.

Miller’s relationship with Jude Law was widely publicized and criticized in the tabloids. In 2004, they became engaged, and in 2005, Law publicly apologized to Miller for having an affair. Miller and Law tried to salvage the relationship but ultimately parted ways in 2011. Miller began dating Sturridge shortly after the split.

Actress, model and fashion designer Sienna Miller is known for her roles in “Alfie,” “The Edge of Love,” “Factory Gir”l and “Layer Cake.” She is the Global Ambassador for International Medical Corps and has traveled to the Democratic Republic of the Congo and Haiti with them. She is also an ambassador for the UK branch of the Starlight Children’s Foundation.