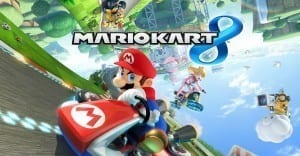 For anyone who’s played Mario Kart 8, you’re well aware that the game won’t allow you to speak in public multiplayer lounges. You can as long as it’s a lounge created by you for playing with people on your friends list, but if you’re just looking for some anonymous multiplayer fun, well, you’re given Nintendo’s preset messages to use in between games.

Penny Arcade’s most recent comic about Mario Kart 8 sums it up pretty well. I play with my boyfriend from time to time, and we absolutely rage at the amount of red shells and blue shells that the AI get. That’s just in our living room, yelling at each other (why does second place get a red shell right before the finish line, anyway?). Could you imagine having the freedom to yell at total strangers, some under 15? Tears would be had. Many tears.

But that’s just in the lounge. Anyone who has played also knows that there’s no talking, even to friends, in the actual match. All conversation has to happen in the lounge beforehand. I think most players understand why this is the system and why Nintendo probably isn’t going to change it any time soon.

Let’s admit it. When someone hits you with a red shell and you’re in first place two seconds before the finish line, then passes you to take the win, you’re going to have some choice words for them. But even in the middle of the race and you blue spark off Special Cup’s Rainbow Road for the millionth time, choice words are to be had.

Gamers all over are downloading Skype and Google Hangouts to their phones and tablets just to talk to each other during the match. Conotrolled communication was a good call on Nintendo’s part, for sure. They’re a company that prides themselves on being completely family friendly and appropriate for all ages.

It is unfortunate, however, that the behavior of gamers online is taking us down the path of hand-holding and kindergarten playground monitoring to make sure we aren’t shoving each other off the swing set.  Most 3DS owners are aware of the cases where people would send lewd and sexual pictures through the 3DS message system—even though a good chunk of 3DS owners are kids. Think Nintendo is going to allow that on their Wii U? I’m pretty sure no one does; not with how hard Nintendo is working to see the Wii U actually turn a profit.

What do you think? Is Nintendo’s system one that should be implemented in other areas of online gaming, or is it just a little too heavy-handed? Should there be an opt-in feature for voice chat in Mario Kart 8?