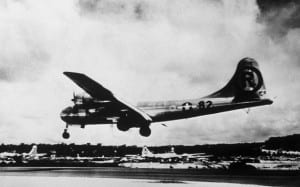 In an exhibition in a new medical history museum that opened Saturday in the city of Fukuoka, details were revealed about the dissection of live US personnel that were captured by the Japanese.

After a B-29 Superfortress was shot down during a bombing run over Japan, nine out of the twelve crewmen survived before being detained by Japanese authorities.
One was shot down while in the process of parachuting down and another two were killed by locals.

Captain Marvin Watkins was sent to Tokyo for interrogation and the rest were sent to Kyoto Imperial University’s College of Medicine, the predecessor of the current day university.

Some PoWs were injected with seawater to see if the water could substitute for saline solution.

Other captives had parts of their liver removed to see if they could survive without them while another captive got part of his brain surgically removed.

The remains of the crewmen were stored in formaldehyde until the end of the war when the evidence of the experiments were destroyed.

Of the total twenty four doctors who were involved in committing vivisection and illegal removal of body parts: one committed suicide, five were sentenced to death, four were sentenced to life in prison, and the rest got shorter sentences.

However Douglas MacArthur, who was the governor of Japan at that time, commuted the death sentences and generally gave all the perpetrators shorter sentences. By 1958, all the convicted were out of prison.

This revelation comes after nearly a month after German Chancellor Angela Merkel, on a two day visit to Japan, called for Japanese Prime Minister Shinzo Abe to admit to Japanese atrocities.

In statements released by Asahi, a left leaning Japanese Newspaper, Merkel noted: “Germany was lucky to be accepted in the community of nations […] This was possible first because Germany did face its past squarely, but also because the Allied Powers who controlled Germany after the Second World War would attach great importance to Germany coming to grips with its past.”

However just Tuesday, the Japanese Ministry of Education approved new textbooks that lightened the atrocities committed by the Japanese or did not even mention them. According to the Asahi newspaper, one textbook completely dropped passages referring to the 1937 Nanjing Rape/Massacre.

Japan is still reluctant to admit to the utilization of ‘comfort women,’ women who were forced to work in military brothels to the dismay of neighboring South Korea and China.