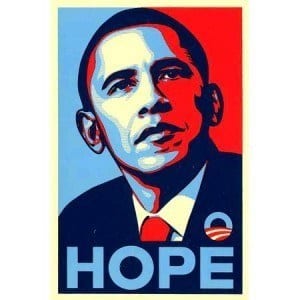 Shepard Fairey, the street artists whose Obama “Hope” poster is recognizable to every American, entered a guilty plea last week in his criminal case with the Associated Press (AP). According to reports, Shepard Fairey pleaded guilty in New York to one count of criminal contempt for destroying documents and manufacturing evident.

Shepard Fairey had previously sued the Associated Press in 2009 after it claimed he had committed copyright infringement by using an AP picture to create his “Hope” poster.  In his suit, Shepard Fairey claimed he had used a different picture and that he was protected by fair-use laws. The civil case was settled out of court, but the 42-year-old artist later admitted he had been mistaken about, which picture he used and tried to hide his mistake by fabricating and destroying documents. The actions of Shepard Fairey caused the launch of the criminal investigation that ended last week with his guilty plea.

“I was ashamed that I had done these things, and I knew I should have corrected my actions,” said Shepard Fairey on Friday in court in Manhatten.

Shepard Fairey is facing up to six months in prison and up to $5,000 in fines; his sentencing date is set at July 16. Daniel Gitner, Fairey’s lawyer, said his client took “full responsibility” for his actions and had “cooperated fully.”

The president of the AP, Tom Curley, released a statement, “The A.P. hopes that some good may come of this, by alerting judges and parties to the possibility that fake evidence may exist.”