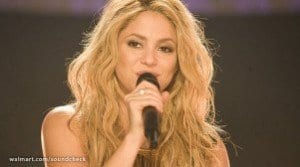 Shakira is one proud mom-to-be! The 35-year-old singer took the stage Saturday night for the closing ceremonies of the FIFA U-17 Women’s World Cup in Baku, Azerbaijan displaying her baby bump without reserve. Clad in a tight black dress, skin-tight leather leggings and tall black boots, she flaunted her growing belly for all to see.

Shakira announced the reason behind her baby bump on her Facebook page on Sept. 19, saying that she and boyfriend Gerard Pique are expecting a baby boy. Shakira, 35, and FC Barcelona soccer star Pique, 25, have been dating for around a year and a half.

The baby bump made its first appearance via a picture Shakira tweeted on Oct. 6.

“Now I don’t have a sixpack, only one pack!” the singer said of her growing belly.

Shakira also tweeted before she went on stage in Azerbaijan that it was fitting for the baby bump to debut at a “football” event.

“In a few minutes it will be our baby’s first time on stage and precisely at a football event! Magic Shak,” the singer happily tweeted. After the performance, she tweeted that “we really enjoyed tonight.”