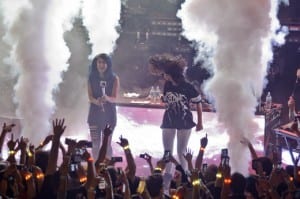 After the separation of the original KREWELLA trio composed of the Yousaf sisters (Jahan &  Yasmine) and Kris “Rain Man” Trindl, this rowdy dance music duo has been struggling to make their way back to the top.

I’ve been following KREWELLA since 2010 and after hearing their 2012 Play Hard EP, I fell in love with their energy. After the debut of their album, Get Wet, they almost instantly went mainstream. Their mainstream sound gained them a larger fan base but at the same time resulted in them losing much of their original followers.

On May 14, 2015, I had the opportunity to come from Detroit and cover their show at one of my favorite Chicago venues, Park West. This event was powered by Pandora and free to the first 900 people that had RSVPed. Last time I saw KREWELLA was back in October of 2013 in Detroit while they were on tour with Rain Man.  After this show I quickly lost interest after hearing them sing live. This time I was excited to see if the duo had improved over the year.

Doors to the event opened at 8 and the show was restricted to people 21+. This really shocked me because most of KREWELLA’s fan base are young adults or high school kids trying to rage. KREWELLA did not start playing until 9:45, up until that time many fans were just mingling around and not dancing to the small name opener who needed improvement on his transitions. When KREWELLA finally went on they started off with their hit singles then transitioned into massive dubstep hit after hit. To my surprise many massive mash pits did not ripple throughout the show until later on.

I realized that the venue depleted of fans close to 10:30. Luckily I came with no expectations as Jahan and Yasmine tried to sing live to some of their songs they sounded exactly like they did the last time I saw them. The acoustics of this show were pretty off no matter where you stood. The guitar and drums would be over powering and ruin the drops. I have to admit that their energy and stage presence is the one thing that I admire most about them. As performers both girls are excellent, they engage their fans and make them feel alive.

[easy-social-share buttons="facebook,twitter,google,linkedin,stumbleupon,pinterest" counters=0 hide_names="force" fixedwidth="yes" fixedwidth_px="111"]
Previous ArticleHow To Get That Perfect Body For The SummerNext ArticleSave Money With Your Student ID