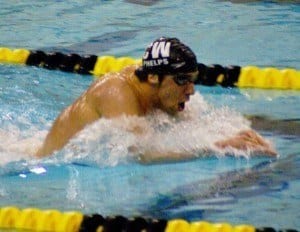 26-year-old to retire after London Olympics

Michael Phelps has announced he’s going to retire after the Olympics in London this summer.

A year ago, Michael Phelps was unmotivated, skipping practices and partying. But he’s recently pushed himself back into shape.

In an interview with Anderson Cooper on 60 Minutes Sunday, Michael Phelps said that it was hard to get back in training mode, but he feels ready for London now. “It was hard, because I didn’t know if the passion or the fire was still inside of me,” Phelps told Cooper. “And it took awhile for me to actually realize it myself. [Coach] Bob [Bowman] couldn’t tell me, my mom couldn’t tell me. They couldn’t help me find it.”

“I kind of feel like my old self again,” the 26-year-old said. “I’m swimming times like I used to. I’m swimming races how I used to.”

Bowman said that despite the swimmer’s lapse into laziness, he believes he can still walk away with several medals in London this year. If Michael Phelps can get just three medals during the Summer Olympics, he will retire as the athlete with the most Olympic career medals. The current record is held by former Soviet gymnast Larissa Latynina.

Michael’s mom, Debbie Phelps is pushing  him to compete at the 2016 Olympics, in Rio de Janeiro, Brazil, but Michael is adamant, saying he’ll take her to watch, but he won’t compete. “No. Once I retire, I’m retiring. I’m done.”

Michael Phelps has added seven sponsors since Beijing, including Head & Shoulders. It’s estimated he’s made $40 million so far over his career.

When he retires, Michael Phelps will only be 27-years-old. After spending so much time in the pool, he’s excited to experience what else is out there, he told Cooper. “I’ve been able to go to all these amazing cities in my travels and I haven’t been able to see them at all. I see the hotel and I see the pool. That’s it. And I’m just going to go and do whatever I want to do.”