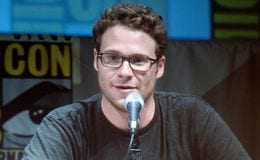 While Rogen’s fans were lining up to see “50/50”, his film released on Friday, he was busy tying the knot. On Saturday at Kunde Estate in Sonoma, California, 29-year-old Rogen wed his long-time girlfriend, 30-year-old Lauren Miller, says hollyscoop.com. The ceremony was officiated by a female rabbi and lasted three days. After the ceremony ended, the pair drove off in a convertible to the nearby location of the reception.

The two met and began dating in 2004 when Rogen was a staff writer on “The Ali G. Show” and Rogen proposed last September. Last November, Rogen revealed to Conan O’Brien that he struggled with carrying around the ring and was nervous about proposing. “Literally, I felt like someone had given me like a truckload of heroin to hold onto. I felt like the feds were going to kick in my door at any second,” he said in his interview. Because having the ring on him constantly wracked his nerves, Rogen reportedly proposed randomly on the spot, while Miller was changing her clothes in the closet.

Read more about the wedding here.