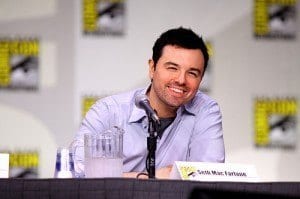 Seth MacFarlane has the Oscar world buzzing as the Academy of Motion Picture Arts and Sciences announced Monday night that he would be the host of the next Academy Award show. The decision shocked many as Seth MacFarlane is best known for his animated projects, including but not limited to Fox’s Family Guy, American Dad!, The Cleveland Show and the summer blockbuster comedy Ted, in which he voiced the sassy but endearing teddy bear Ted. But, he was apparently seen as a step in a new direction for the Oscars, hopefully bringing in a younger and possibly more engaged audience.

While he is well known in the comedy realm, Seth MacFarlane is famous for specific reasons. A creator, writer, voice-actor extraordinaire resume makes him a well-respected man, though he may not be too recognizable by face as he comes out from behind the scenes to host the awards show. Pulling from his recent SNL performance, Time magazine also suggests Seth MacFarlane may be a bit “stiff” and not able to make the audience feel comfortable.

On the plus side, he seems to conquer anything he puts his mind to. Seth MacFarlane started drawing Fred Flintstone and Woody Woodpecker cartoons at just two-years-old, attended the Rhode Island School of Design and graduated with his senior thesis “Life of Larry” eventually inspiring Family Guy. The 38-year-old is also a classically trained singer and can really belt it out.

MacFarlane is definitely a surprise choice and many are eager to see how well the event fares with the funny-guy host, but he seems to have a good grasp on how to approach hosting the Oscars and what tone he needs to aim for.

“It’s a very specific ceremony with a very specific tone,” Seth MacFarlane said. “The challenge will be to keep it funny, keep it lively and stay true to what it is I do. But at the same time adapt to the tone of this event. It’s a challenge but I’m looking forward to it.”

Comedy, classical singing and Family Guy voices should make for a fun night. Oh, and the actor and movie awards should be interesting, too.