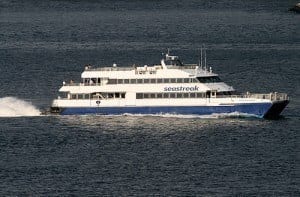 A Seastreak ferry shuttling between New Jersey and Lower Manhattan crashed into Pier 11 this morning in a rare ferry accident for New York City’s docks.  Hundreds of passengers were jolted as the boat violently hit a loading dock at approximately 8:45 a.m. near Wall Street.  The force of the impact injured 57 passengers as they were tossed into each other waiting to disembark from the boat—2 passengers have been reported to be in critical condition.  Those reported worst off suffered head trauma from being flung down the stairs at the time of impact.  The ferry, heading towards the dock at a steady clip, hit one of the loading barges extending from the pier and suffered extensive damages including a huge gash on the outside and broken glass and debris within.

The National Transportation Safety Board has been dispatched to the scene to investigate the cause of the ferry mishap, but the ultimate cause remains uncertain.  The ferry itself, a 2003 catamaran, was due for a major mechanical overhaul in a couple of months and was reportedly unpopular among ferry captains because of its stiff maneuverability.  Once the ferry recovered from the crash it was able to dock normally, and passengers were quickly escorted off with some strapped to stretchers to reduce head and neck movement as a precaution.

This is not the first ferry accident to affect New York City commuters.  In 2003 one of the worst accidents in recent history shook the shores as a Staten Island Ferry missed a dock and drove full speed into a maintenance pier, killing 11.  The pilot of the 2003 ferry was sentenced to time in prison when investigators found out he had taken painkillers the night before for a bad back.  This time around, the entire Seastreak Ferry crew has taken and passed breathalyzer tests, largely ruling out any immediate charges of workers under influence causing the accident.  Seastreak Ferry, a popular high-speed ferry service, routes daily commuter ferries and spokesman Tom Wynne vouched for all ferry captains, stating “All of our captains have a great deal of experience.”