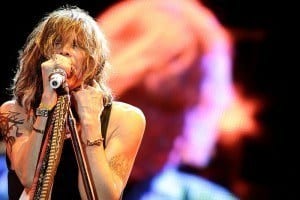 Steven Tyler comments on change as others comment on him

The past week has brought season finales that less than impressed Steven Tyler.

After seeing Mick Jagger’s impersonation of Steven Tyler during Saturday Night Live‘s sketch called, So You Think You Can Dance at an Outdoor Music Festival as a judge, Tyler thought Jagger could have added a little more zest and meme to his act.

Steven Tyler explained to Hollywood Life that “They got it so wrong; He could have done the yeah yeah yeah!” Although Tyler was not completely amused by the impression, he said Mick Jagger’s Steven Tyler was “fun.”

In the meantime, after the season finale of American Idol, tweets were created in mockery of Steven Tyler.

At the season finale of American Idol, as Aerosmith was preparing to take the stage, Tyler was asked if he would be upset if Jennifer Lopez left the panel.

Steven Tyler responded, “Yeah, probably. Everything evolves. Who am I going to sit next to that makes it really worthwhile?”

Lopez told Ellen Degeneres on her show that she was not certain she would return for season 12 as her children grow and become harder to chase around.

While Lopez attempts to adjust her self to her family’s development, Aerosmith prepares for a summer tour, and a new album release. The album will be titled Music From Another Dimension, and will hit the shelves on Aug. 28th.