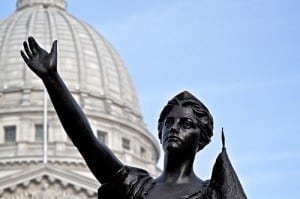 Scott Walker will soon know his opponent in the upcoming recall election for Wisconsin’s gubernatorial seat.

Scott Walker, the embattled Republican governor, faces a recall election on June 5 after state Democrats and opponents of his policies submitted more than 900,000 signatures to the state elections board.

Walker became the center of heated controversy after taking office in 2011 when he enacted a measure designed to curb the political powers of labor unions within Wisconsin. Walker’s measure curbed the collective bargaining power of public sector unions. The legislation also required public sector union members to pay a portion of their pension and health care benefits. The law also requires public unions to recertify each year. Walker’s battle against collective bargaining rights has inspired many on the right and spurned many on the left, creating a clearly polarized political atmosphere within the state.

Walker’s expected opponent in the recall election will be Milwaukee mayor, Tom Barrett. Barrett lost the Wisconsin governor’s race to Walker in 2010 by just five percentage points and, according to a Marquette Law School poll, if Barrett and Walker were to again face off in an election they would be in a virtual tie among registered and likely voters.

Wisconsin is seen by many as a key battleground state in this year’s presidential election and politicians and pundits alike are eyeing the outcome of the June recall election carefully as a decisive victory for either party could lead the way to an influential presidential primary.