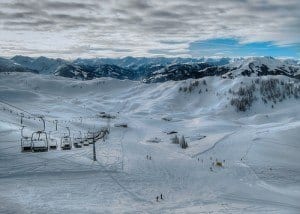 School closings across the midwest are providing students a much appreciated day off, due to a cold front that is delivering the region some of the most frigid winter weather in two years.  Get out the ice scraper and bundle up because some parts of the Midwest and Great Lakes region are expected to see about 45 degrees below zero today.
A whopping fourteen public schools were closed today in Minneapolis, Minn., due to low temperatures more than 40 degrees below zero.  In Cleveland dozens of schools filled local 3 WKYC’s school closings page as the city fights temperatures so frigid that the air outside feels 10 to 25 degrees below zero.
Midwesterners can blame the frigid weather on the arrival of bitterly cold Northwest winds, which originated in the Arctic Circle.  Forecasters in Chicago expect wind gusts of 30 mph, making the air outside feel like 20 degrees below zero.
Other parts of the midwest have it even worse.  International Falls, Minn., Green Bay, Wis., and Minneapolis all reported subzero temperatures while Chicago remained at 9 degrees, Tom Skilling, WGN-TV’s chief meteorologist, told the Chicago Tribune.  Grand Marais, Minn., on the north side of Lake Superior, saw a low temperature of 54 degrees below zero.
In Chicago, five local schools have already closed or are opening late, according to the Emergency Closing Center.  Three schools have closed in Detroit, one with no night classes.
Cleveland, Pittsburgh and Buffalo all feel like 10 to 25 below zero today, and another pocket of cold air is keeping temperatures in the twenties in New York, northern Vermont and New Hampshire until the end of the week.
“When we hear about the (extreme) weather we sort of go into high alert,” said Sandy Ramsey, executive director of the Cornerstone Community Outreach homeless shelter, to a Chicago Tribune reporter.  In response to the frigid weather, Chicago city officials opened one of their six warming centers Monday.  All six centers are open on weekdays when temperatures fall below 32 degrees.