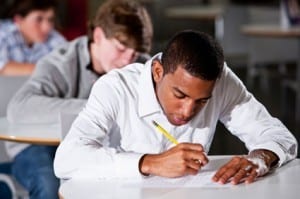 There appears to be a disturbing trend in American high schools. If we judge the quality of education by the scores that students get on their SATs, then it appears that things are getting worse. Since 2006, the overall average SAT score has fallen by 20 points, dropping from 1518 to 1498 in 2012. Scores are also down in each of the three categories tested, with reading dropping 9 points, mathematics dropping 4 points, and writing falling 9 points. It’s a fair bet that students aren’t becoming less intelligent, so exactly what is going on?

To start with, it appears that changes to SAT testing in 2005 have not served many minority groups well. According to an analysis by the National Center for Fair and Open Testing, the average score for white students has fallen 4 points, whereas other ethnic groups have fallen by up to 22 points. The one dramatic exception to this is the Asian American community, which has seen scores rise by an astounding 41 points. Many proponents of testing reforms had argued that such changes would result in a leveling of the playing field across different ethnic populations, but this has clearly not proven to be the case.

However, ethnicity is not the only factor, and in fact access – or lack thereof – to quality education may explain a significant proportion of the racial gap. Family income is positively correlated with SAT scores, as is completion of the recommended core curriculum that is designed to prepare students adequately for their SATs. While 80% of white students completed the core curriculum prior to taking their SATs, only 69% of Latino students did, and this number dropped to 65% among black students. Similarly, students who came from families with incomes of at least $200,000 a year completed the core curriculum 84% of the time, whereas those whose family income was less than $20,000 only did so 65% of the time.

The value of investment in additional education becomes readily apparent when you consider the performance of Asian Americans in mathematics, where the gap between their scores and those of other ethnic groups is most pronounced. Asian Americans averaged 595 in this area, compared to an average of 465 for Mexican Americans and 428 for black students. At the same time, 47% of Asian American SAT candidates took advance mathematics courses, while this dropped to 31% among Latino students, and reached a low of 25% among black students. The message is fairly clear and straightforward – access to proper SAT prep, either through school or through private tutoring, has an enormous impact on success in SATs.

All of this has disturbing implications for the future of postsecondary education in the United States, especially for minority groups. The College Board, the not-for-profit organization that, among other things, administers the SAT, has recently stated that students need a score of 1550 on their SATs in order to succeed in college. Of those who achieve this score, 65% earn a GPA of 2.67 or higher. Given, for example, that the average score for Mexican Americans is 1356, and black students average 1273, this means that these ethnic groups are arriving at college ill-prepared for higher education. It also means that the opportunities for minorities at highly selective and elite institutions will continue to become more and more limited if SAT scores continue to decline – reinforcing the economic disparities that may have given rise to declining SAT scores in the first place.

In fact, the College Board, in addressing the decline, has in many ways confirmed the reasons for the current malaise in our high schools. They point to changes in the testing pool, saying that it is becoming larger and more diverse. For instance, the number of students from minority groups taking SATs has risen from 38% in 2008 to 45% today. Furthermore, 28% of students taking the test now say that English isn’t their first language. James Montoya, a vice president with the board, has said that the most recent results are a call to action, observing: “There are many students who have the potential to succeed in college, but they are not being supported by our education system.”

Interestingly enough, while the number of students taking SATs has risen, the test has recently been overtaken by the ACT, a test that used to be primarily confined to the Midwest and Rocky Mountain states, but which is now gaining wider acceptance. ACT scores, unlike SAT scores, have remained relatively stable over the last several years. It would be interesting to know whether this is due to the nature of the test, or due to a different demographic profile among the test