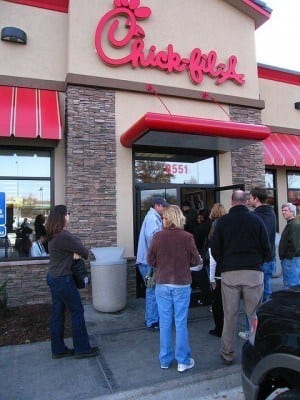 After Chick-fil-A President, Dan Cathy, voiced his opinion on same sex marriage, both supporters of him and gay rights supporters have been protesting either for or against Dan Cathy and Chick-fil-A.

Supporters of Cathy’s message of “the biblical definition of the family unit” have been lining up around Chick-fil-A’s around the country showing their support for their company. Wednesday was “Chick-fil-A Appreciation Day,” where there were long lines at more than 1,600 Chick-fil-A’s across the country.

However, tonight at 5 p.m. gay rights supporters will be holding a counter protest against Chick-fil-A and their message in San Diego called “National Same Sex Kiss Day.” Gay rights supporters are trying to make this protest a fun way to show equality and say that they are going to be themselves. There will be a kissing booth and many signs up in order to encourage people to be themselves at same sex kiss day. This counter protest against Chick-fil-A and their supporters is a way to speak out when being discriminated against.

Although Dan Cathy voiced his personal opinions on same sex marriage, a company statement stated that, “The Chick-fil-A culture and 66-year-old service tradition in our restaurants is to treat every person with honor, dignity and respect – regardless of their belief, race, creed, sexual orientation or gender.”