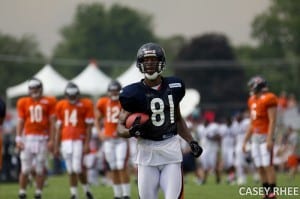 The Chicago Tribune reports that Hurd was arrested on drug charges. Reportedly, Hurd’s case is being investigated by the Immigration and Customs Enforcement office in Dallas.

A Bears spokesman has confirmed that the team is aware of the investigation and are looking into it.

Hurd signed a three-year contract with the Bears after playing the previous five season with the Dallas Cowboys.

You can read more about Sam Hurd’s arrest here.