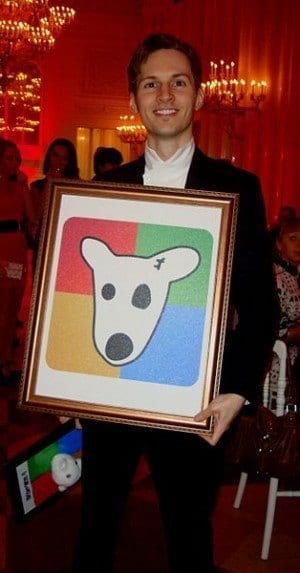 The Russian Mark Zuckerburg Pavel Durov spent his weekend throwing paper planes made of money out of his St. Peterburg office. Durov threw 5,000-rouble notes—approximately 106 Euros—eventually drawing a crowd below his window.

According to DailyMail U.K., Durov is considered the Mark Zuckerburg of Russia. He is the founder of Russia’s popular social networking site VKontakte—translated to Contact.

Durov’s innocent act to create a festive environment to commemorate City Day that weekend eventually turned to something resembling a brawl. According to RT one witness stated, “People turned into dogs as they were literally attacking the notes…they broke each other’s noses, climbed the traffic lights with their prey—just like monkeys. Shame on Durov!”

Durov took to Twitter remarking to his actions, “We had to stop soon, though, as people turned into animals…definitely, more such actions are to follow.”

VKontakte was launched by Durov in 2006. Aaccording to DailyMail UK the company’s growth surpassed all of Russian Internet records and remains the most popular social networking site in Russia, Belarus and Ukraine to date. VKontakte has more than 150 million users and 33 million daily visitors.

Durov is estimated to be worth 7.9 billion rubles—$260million. Throwing paper planes made of money was not his only hijink. In recent months, Durov published a political manifesto in turning Russia into a prosperous country. In that manifesto he suggested Russia move away from its current currency and rent out territory to foreign investors creating mini-states.