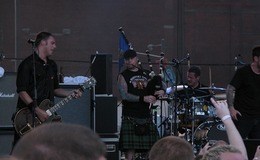 Latest from Dropkick Murphys starts off this week

March is here and you know what that means? Time to put on your green clothes, pin your “Kiss Me, I’m Irish” button on your shirt and drink a pint because St. Patrick’s Day is coming. With the Irish day coming up, I figure we’ll start the list with one of the quintessential Celtic-punk musicians around.

The past few years have really kind to the Celtic-punk band. Thanks to their cover of Woody Guthrie’s “I’m Shipping Up to Boston” appearing on the “The Departed” soundtrack, and their constant touring, the band is set to become a household name. “Going Out of Style” will have fans new and old on their feet and singing along to the catchy title track and “Hang Em’ High.”

If you’re a hard core James Brown fan or if you’re just starting out, you might want to give this latest collection a listen. As the title states, it’s a collection of hits and rare tracks from 1975 to 1979. During this period, Brown was leaning more toward Disco, but he never lost his funk-soul roots. Included here is his cover of David Bowie’s “Fame”, Elvis Perseley’s “Love Me Tender” and the rare “Everybody Wanna Get Funky One More Time.” Like I said, James Brown fans new and old should pick this up.

Hey kids! Do you want to hear your favorite artists and super low prices? Well, gather around and buy up the “Icon” series. “Icon” was started for those who want to experience their favorite artist, but can’t afford the price (stupid record companies). So for only $14.35 you can get War, Peter Frampton, Loretta Lynn and the most esteemed of them all: Bloodhound Gang. As for War, you get all the hits, like “Slippin’ Into Darkness”, “Cisco Kid”, and “Low Rider” for the cheap. Get your copy today!

When Matilda’s lead singer Chris James states he wanted the album “Stateless” to “be like a journey”, some might roll their eyes up and say “whatever”. But when you listen to it, you will be forced to admit that the album is like a journey, a beautiful yet disturbing journey. The band Matilda offers an almost mystical and funky trek through the musical landscape. As evident by the track, “Aerial”, the sound is a layered set of quaint and melancholic, twinged sounds.

Space Invadas consists of Katalyst and Steve Spacek. Hailing from Sydney and London respectively, the pair has made some sweet music to say the least. With Steve providing soulful vocals over Katalyst’s funky, spaced-out beats, they have taken the international stage by the short hairs and are setting their sights on the the U.S.. So all you yanks better watch out because here they come.