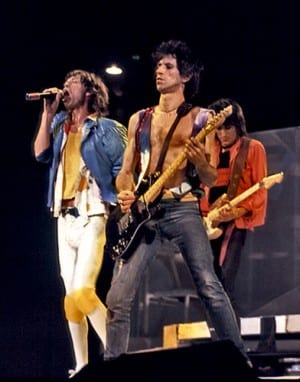 The band celebrates its 50th Anniversary with four shows

The Rolling Stones have announced they will play four shows to celebrate the band’s 50th Anniversary. For the first time in five years, fans will have the chance to catch the Stones live as the band intends to play two gigs in their homeland of Britain and two in America.

The first Rolling Stones performances will take place on Nov. 25 and 29 at London’s O2 Arena, whereas the band will rock stateside at the Prudential Center in Newark, New Jersey.

This 50th Anniversary for The Rolling Stones is the first time the legendary rock group will perform live since the band’s “A Bigger Bang” tour that took place from 2005-2007. The two year tour earned the already affluent band more than $500 million, so one can be sure that the celebratory appearances, though not expected to achieve the same caliber of cash as the 2005-2007 tour, will surely garner as much buzz and anticipation as their previous tour stint.

The Rolling Stones’ plans for a four-gig concert series closes out 2012 as the icing on the cake for the band’s success. Earlier this summer, The Stones released a hardcover book in commemoration of their illustrious career entitled 50. To accompany the book, the band has also decided to release GRRR!, a compilation album set to hit stores in November.

The Rolling Stones are perhaps the longest-running live band in the history of Rock ‘N Roll. Together since 1962, Mick, Keith, Charlie and Ron Wood since 1975, have unequivocally rocked the ages and defined the nature of rock music today.

The story of one last tour is a familiar story for the English rockers. If this is to be The Rolling Stones’ last performance for a while, it will definitely not be one to miss. Who knows, perhaps this tour will be a miniature, yet bigger bang than the last.