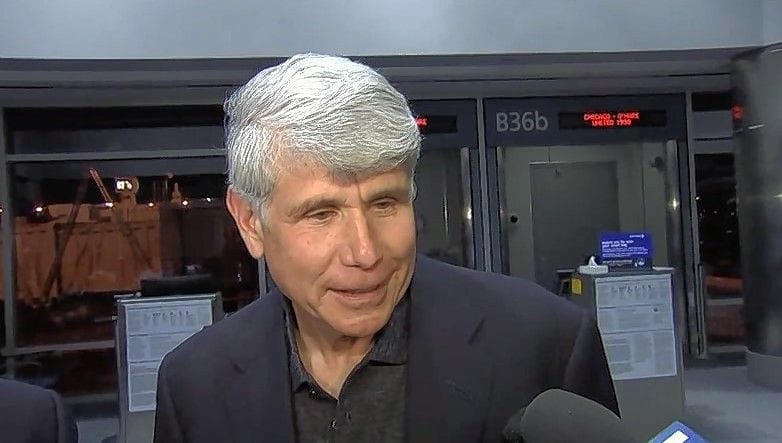 Tuesday evening, former Illinois Governor Rod Blagojevich was released from his 14-year prison sentence due to President Donald Trump commuting his sentence. Immediately after being released Rod Blagojevich hopped onto a plane and touched down in the Windy City of Chicago where curious and admiring fans met him.

“There’s no place like home,” he retorted to the bystanders and onlookers at O’Hare International Airport.

“I’m profoundly grateful to President Trump and I will be as long as I live,” Blagojevich graciously explained. “He didn’t have to do this. He’s a republican president. I was a democratic governor. But he’s a man who’s not only tough and outspoken, strong but he has a kind heart. And I’ll be forever grateful.”

Dubbing himself a “Trump-ocrat” after the President prompted his early release, Blagojevich has a lot more in common with President Trump than just both being in politics. Blagojevich was accused of large amounts of corruption, notably in the category of finances. Blagojevich was convicted of attempting to sell Barack Obama’s Senate seat after he went on his presidency campaign. He was also accused of shaking down children’s hospital executives and the horse-racing industry for campaign contributions.

“And they lied on me”

Blagojevich claims he was actually the victim, in the situation and did absolutely nothing wrong. “That if I were given in to the pressure and give in to the shakedown that was done to me, that I would be violating my oath of office to fight for the Constitution and fight for the rule of law and keep my promises to (the public),” he said. “Cause I didn’t do the things they said I did. And they lied on me.”

President Donald Trump hasn’t been silent about his thoughts on the long prison sentence Blagojevich received for the corruption charges. Previously having set to be released in March 2024, Trump made it clear when asked he thought the hefty sentence was way too harsh.

The Rod Blagojevich controversy was a huge stain on Illinois political circles, and current Illinois governor, J.B. Pritzker was highly opposed to the release, which he expressed in a statement.

“Illinoisans have endured far too much corruption, and we must send a message to politicians that corrupt practices will not be tolerated,” Pritzker said. “President Trump has abused his pardon power in inexplicable ways to reward his friends and condone corruption, and I believe this pardon sends the wrong message at the wrong time.”

Blagojevich not only praised and gushed over the president because of his release, but he also noted his wife, Patti Blagojevich as a major reason because of her non-stop dedication in attempting to get her husband pardoned.

“I love her,” Blagojevich doted. “I made a lot of mistakes in my life. But the best thing I ever did was falling in love and being in love with Patti, and I can’t wait to see her and our daughters Amy and Annie. It’s been a long time.”

Because Rod Blagojevich was commuted and not pardoned, he still will have felonies on his record. No one knows what his future holds, but in the meantime we expect the silver-haired former governor to have a lot of time to make up for.

Previous ArticleCOVID-19: Everything We Know About Coronavirus Right NowNext ArticleThe Cards We Are Dealt: Being Black in Lyric Opera