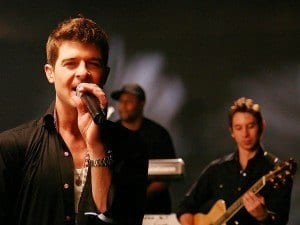 But is it really all that good?

So Robin Thicke has been the “sound of summer” this year. And his new album is out to great reviews. Rolling Stone gave it 4.5 out of 5 stars. I guess that means I’m the only one who’s confused by his popularity.

Robin Thicke does have a great voice. I’m not disputing his ability to sing. I just don’t understand why people are praising “Blurred Lines” so much.

Known for an eclectic mix of sounds, Robin Thicke is continuing to bring together disparate styles of music on his “Blurred Lines” album. Listeners are treated to dance tracks followed by R&B followed by pop and even some rap. Anyone who’s a fan knows that’s what Thicke loves to do.

“I never try to be just one thing, or do one thing,” Robin Thicke said in an interview with MTV. “I always try to mix up all different styles of music. And so I think sometimes people get surprised, like, ‘Oh, this doesn’t sound like that last song.’ Well, this doesn’t sound like the next song. So I think it’s the good, and bad, that you can get something very fresh and never know what’s coming next on my albums.”

The first single from the album, “Blurred Lines,” has been doing well on the charts. It hit #1 on Billboard’s Hot 100, Pop Songs and Hot R&B/Hip Hop Songs charts. And at the 2013 MTV Music Video Awards, Robin Thicke is up for Video of the Year, Best Male Video and Best Collaboration.

That’s my big problem with Robin Thicke. If you haven’t seen the video, it is…. I actually don’t have a word to describe it. There are two versions of the video: one rated, the other not. But both are truly a new level of bizarre.

The unrated version disturbed me the most. Robin Thicke, Pharrell and T.I sing while naked women walk around them in ridiculous heels. Obviously the men were completely covered. Oh, and then the women dance naked on some sheep.

The song is dumb on its own. It has a catchy beat, but any writer who thinks the lyric “what rhymes with hug me” is sure to be hit has some serious problems. That’s just sloppy, lazy writing to me.

If you like Robin Thicke, good for you. You just keep listening. You can buy his “Blurred Lines” album now on iTunes or Amazon. I will instead try to scrub my brain of the memory of watching the music video.