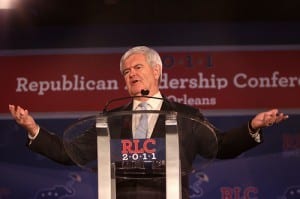 Robert De Niro hosted a fundraiser for President Barack Obama in New York last night and stirred up a little controversy by telling a joke. He said, “Callista Gingrich. Karen Santorum. Ann Romney. Now do you really think our country is ready for a white First Lady?”

Even Michelle Obama was in attendance during the joke. Good ol’ Newt Gingrich heard about it and was utterly offended, telling President Obama to apologize for the Robert De Niro joke. You would think by now Newt would have learned how to take a joke about his wife/wives- but guess not. Gingrich responded saying, “What De Niro said last night was inexcusable, and the president should apologize for him. It was at an Obama fundraiser… if people on the left want to talk about radio talk show hosts, then everybody in the country ought to hold the president accountable when somebody at his event says something as utterly, totally unacceptable as Robert De Niro said last night.”

Gingrich is comparing Rush Limbaugh’s comments about Sandra Fluke from earlier this week, calling her “a slut,” but it’s not like he apologized for Limbaugh’s comments, so why should Obama? Rush Limbaugh has since lost many sponsors for his comment, but it is highly doubtful the Robert De Niro joke will create a comparable buzz in the media.

Newt got his wish though, sort of, when Olivia Alair, the press secretary for Michelle Obama, issued a statement about the Robert De Niro joke saying, “We believe the joke was inappropriate.” There Newt, ya happy?