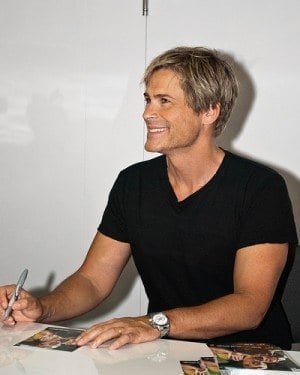 In an odd series of events yesterday, the Twittersphere was all shook up with the announcement that Peyton Manning was retiring. To make the story even stranger, the announcement came from actor Rob Lowe in the form of a tweet.

Using his official Twitter account, Rob Lowe tweeted, “Hearing my fave, #18 Peyton Manning will not return to #NFL. Wow. #Colts” on Wednesday. The tweet gathered steam very quickly and was retweeted hundreds of times. ESPN’s Rich Eisen was flabbergasted by the tweet, simply replying to Lowe with “get out.”

Lowe tweeted at Eisen, saying, “My people are saying Manning will retire today. What do you hear? #NFL” and then tweeted, “#Colts fans, let’s hope my info is wrong. Don’t like being wrong, but this time… I’m hoping #NFL #Manning.”

Lowe’s son, Matthew, tweeted at his father, saying, “It’s okay dad, Johnny and I still love you even if you did stir up the twittersphere… even on the blackout. #SOPA #Faceplam.”

Lowe has connections to the Colts, but there has been no official word as to the fate of Peyton Manning…yet.