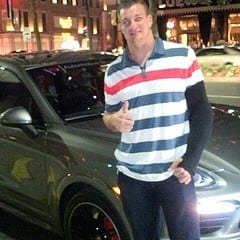 New England Patriots tight-end Rob Gronkowski is well-known for his play on the football field. But his activities outside-the-lines are becoming a thing of legend as well; in the last year, cameras have caught Gronk hitting the clubs the night after his team’s 2012 Super Bowl loss, wrestling while trying to recover from a broken forearm, and generally engaging in shirtless antics in public places.

“There is no question that Rob Gronkowski has what it takes to make an excellent male performer in today’s adult industry,” Sex.com said in a statement. “He has proven both on and off the field that he has the body and the attitude to be a hugely popular male adult star.”

The potential payday of nearly $4 million equals the salary Gronk would be due in 2014, but he doesn’t need the money; he signed a 6-year, $54 million contract extension last off-season.

A $3.75 million paycheck would be ludicrously high for even the most famous of adult stars—Ron Jeremy has appeared in over 2,000 adult films but grossed around $5.5 million, according to the New York Post.

It’s unclear is Gronk would be violating the NFL Code of Conduct by accepting the offer. It likely doesn’t matter; for better or for worse, the superstar tight end seems to have ignored the offer.

That won’t stop some people from eagerly awaiting the release of the film, which Twitter has tentatively titled: “From Tight End to Wide Receiver: The Bibi Jones Story”.