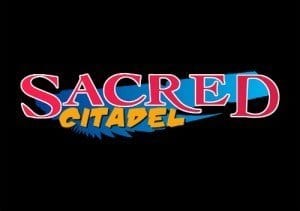 A beloved series gets a new coat of paint

In the world of Ancaria, the setting of the Sacred universe, there is a deep layer of character progression and role-playing inherent to both the first and second game in the series. New downloadable title, Sacred Citadel, steps away from the isometric view of old and presents a side-scrolling, beat-em-up with mild shades of RPG. The bright colors and appearance of particular races certainly cast a nod to the Sacred lore, but the overall feel of the game is something that fans of the former titles will find to be out of place.

Gameplay takes over in Sacred Citadel, implementing a single player campaign or a co-op experience with up to three players, a disappointing design choice considering there are four classes, each of them unique. The warrior, mage, shaman, and ranger each play their roles precisely as you’d expect, focusing on high defense, magic, healing, or high damage respectively. Each character can wield dual-melee weapons or a class-specific unique weapon that adds another layer of gameplay as players constantly compete for high combos, attainable with carefully executed button presses. Blocking and dodging is a key element to ensuring survivability, though dodge is truly the only defense you need, particularly when battling bosses. As players maintain high combos and unleash pain against the constant stream of minions thrown against you, a special ability meter builds with up to three levels of destruction, each significantly better than the last in both visuals and execution.

As players progress through level after level, traveling through murky swamps, dark mines, or even snow-capped mountains, enemies may drop items that are of particular use. Weapons and armor become available, creating a meta-game between players as they dash to pick up what may increase damage or defense exponentially. Fear not though, because the others in the group can simply head back to the town area, a hub used to resupply on potions, purchase new arms and armor, or freely trade their weapons for anything that the group has gathered on their journey.

Though the artstyle and the camera angle are drastically different than that players will remember from the other Sacred titles, with the new hack-and-slash action/adventure gameplay that Citadel boasts, they compliment each other perfectly. Earthy browns and grays give way to brilliant bright colors that splatter character models and terrain equally. Combat also presents a visually stunning maelstrom, though players who tend to glance around the scenario will lose sight of their character during particularly busy scrums. A flick of your right thumbstick will bring you rolling out of the combat, but also may put you in harm’s way, a frustrating experience when you’ve been carrying a max 99-hit combo for a large portion of the combat.

Finally, while the combat is never grossly difficult, specifically with the help of a friend playing cooperatively, the final boss you face in the fourth chapter (prior to the already-released DLC), is frustratingly difficult. Granted, one you pick up the pattern and work to counter his aggression it becomes a tad easier, but defeating him without the help of a dedicated healer is a tiresome process. Implementing a boss-fight with multiple instances of refilling health is a practice that has grown beyond troublesome and is a cheap design choice. Rather, a difficult battle without that gimmick would make for far better gameplay, a better personal experience, and would present a feeling of uniformity throughout the experience. As it stands, the boss-fight in question, while being the end of the main campaign, is a thorn in the side of what is generally a fun experience.

Sacred Citadel may well be the prequel to a highly anticipated Sacred 3 that returns to the gameplay that we’ve grown to love, but as a stand alone title it delivers, particularly when playing with friends. Though it’s disappointing to be limited to three players overall, the combat is fast-paced enough to present a challenge. Players are expected to use their combos in order to experience the full-spectrum that the game has to offer, but many will fall into a trap of using the same moves over and over again, which can get tedious. Playing alone can be a chore, but as a shared experience, Sacred Citadel is certainly worth the investment.

Sacred Citadel is available on the Xbox Live Marketplace for 1200 Microsoft Points, or $14.99 on PC/Steam and Playstation Network.

Disclaimer: A copy of this game was provided for review purposes