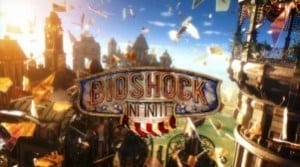 Get the girl, wipe away the debt.

It only happens a few times every generation of gaming, a title is delivered that causes the masses to retreat into themselves and think about an experience they just had. It’s even rarer that it happens in the first-person shooting genre, one typically reserved for Michael Bay-like story lines where explosions are more important than narrative. In 2007, Bioshock delivered such an experience and was lauded as perhaps one of the greatest games of all time. Here, nearly six years later, the team at Irrational games has done it again with the third installment in their series, Bioshock Infinite.

em>Infinite focuses on Booker Dewitt, a survivor of the Battle of Wounded Knee, who is set off with the simple orders, “Bring us the girl and wipe away your debt.” Dewitt is facing severe gambling debt, so it’s his intent to work with a couple of mysterious characters who have tasked him with obtaining “Elizabeth” from aboard the Columbia, a city-in-the-sky which vanished when the residents lost faith in America. The story’s setting, with the exception of the introduction, takes place entirely above the clouds within Columbia. Using a grappling-hook-like device, players will sail between floating islands on a custom-built monorail device. With a setting that has a constant inherent danger of falling, players might expect to routinely meet their maker with sudden slips and tumbles. Due to a tight control scheme and an environment created specifically for large groups of people, the truth is that the blame of any falls lie squarely on the player’s shoulders. In addition to the unique physical setting, the year Bioshock Infinite takes place is 1912, which removes any attachment the player may have to a specific time period. Sci-Fi and space allow players to “imagine if,” where a period from a century ago blends a magical amalgamation of “remember when…” with “imagine if…”

The sci-fi element is still there though, with players progressing through the story collecting Vigors, this installments version of Plasmids. Vigors grant powers to shoot lightning or balls of fire, but also introduce new, interesting mechanics. Throwing a murder of crows at an enemy is a wonderful way to distract them, or casting Bucking Bronco will toss them in the air, removing them from the cover that they so often hide behind. A wide selection of armaments is also available, ranging from simple pistols and rifles, to unique weapons like mortars and handheld turrets. By looting bodies and containers, DeWitt will find currency used to upgrade his Vigors and the weapons found throughout Columbia.

Booker DeWitt’s trek to find Elizabeth is simple, as he’s rocketed to Columbia from a discreet lighthouse in Maine. Once finding her though, the story gets far more interesting and difficult to progress through. Her keeper, a strange bird-like robot named Songbird, flies into a rage at the thought of losing his ward, but Elizabeth holds the power to open “tears,” that is, openings in the fabric of reality. Using these tears, Elizabeth will help make particular tactical choices available to DeWitt, allowing the use of turrets, bringing in additional cover to hide behind, or creating a place you can attach your skyhook and attack from above, either through melee or with your sidearm.

Elizabeth’s soft voice, strong demeanor and near-constant attachment throughout the game help present a well-crafted relationship that causes DeWitt and the player to both grow to care for her well-being. She’s useful during combat, both finding ammo and salts (the equivalent of mana, used for your Vigor), but she’s got such a strong personality that players never really feel as if she’s helpless, nor are you trying to be her saving grace. In fact, DeWitt’s motivations are completely selfish. As the story trolleys through at a pace set by the player, additional content can be found that helps give backstory to the surroundings and the situations certain key people have created. Well-hidden recordings give first-person testimonials and information that isn’t made readily available to players briskly moving through the game, but is also cause for some detriment. While the story is well narrated and explained, certain audio logs give tremendous insight that might be key in understanding Columbia fully. Missing them, which can be common, will result in story holes or questions remaining as the game winds down.

A fantastic shooter with detailed and impressive level design, Bioshock Infinite will reach its apex during the last 30 minutes when all plot hooks are revealed and players are rewarded with unique story elements that will be discussed for years to come. Not shying away from blatant racism or religious zealotry, the team at Irrational Games has embraced conflict, both physical and mental, to create a world very believable for the period. Protagonist Booker DeWitt is a flawed hero, while Elizabeth is clearly a victim who refuses to be seen as one. With some gun battles playing out longer than they should and action that can become repetitive, the influx of various enemies with particular tactics helps remove most of the tedious combat. The story is where the game shines through and players setting foot on Columbia should take a moment to reflect at the beauty of the wonderful city. Then be ready to tear it apart.