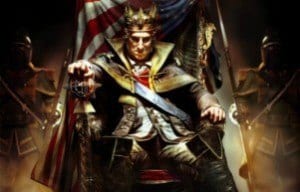 The Tyranny of King Washington DLC for Assassin’s Creed III is expected to be a unique alternate history of our country, one where one of our founding fathers, perhaps the most recognizable and our country’s first president, has become drunk with power. The story spans three chapters, the first having been released on February 19th entitled Infamy. Set in the same wilderness players became familiar with during the game’s main story, this installment of content equips much of the same criticism that the game does. Plagued by shallow gameplay and rocky narrative, making a case for Infamy will be difficult, even for the most hardcore Creed fan.

Waking in an alternate timeline, Connor, who remains known as his native name Ratohnhake:ton,  is reunited with his once-dead mother. It’s immediately clear that Connor is aware of the unique circumstances afoot, as he is shocked to see his mother alive once again. It’s a fleeting feeling though, as he’s plunged into conflict once again. This time though, it’s not the Red Coats falling to his tomahawk; instead, it’s the Patriots who feel the sting. Upon meeting George Washington, now fueled with a scepter that wields the power of a piece of Eden, the character is immediately hated. Instead of the expected inner-conflict that some players might want, there’s a strange want to remove the tyrant from power. And while that breeds a certain anti-American sentiment, the context of the story itself is that which we’ve laid the foundation of our country upon: protecting those who cannot protect themselves.

While the premise of this unique story is interesting on its face, it’s the execution that brings it back to reality. It’s not that the game is bad, it’s just not what we’ve come to expect from Ubisoft. The combat remains largely the same with the exception of a new supernatural ability that Connor discovers. Empowered by the essence of the wolf, the same skin that he wears on his head to form the makeshift hood reminiscent of previous Assassin’s Creed titles, Connor earns the ability to enter a “ghost-wolf” form in order to move unseen, albeit at the cost of his own health. To help him in battle, a small pack of ghost-wolves can also be summoned that easily overrun enemies. It’s a wonderful addition to an already appealing franchise, but their overall implementation will leave you wanting. In order to face Washington and end his reign, Connor infiltrates a heavily guarded Patriot camp using the aforementioned abilities. Using subterfuge as the primary ability, as overt combat results in a mission failure, Connor must follow his target in order to determine where best to strike in order to get at Washington. What should be the end of the story, heightened by intrigue, ends up being a confusing interaction between you and another character, one rarely used previously — at least, in the Xbox 360 version.

With collectibles aplenty, an interesting story and a beautiful winter landscape, the Infamy DLC does add a bit more to your Assassin’s Creed III experience, but if you’re looking for more depth than provided during the main campaign, you’re looking in the wrong place. The story ends somewhat abruptly and the missions, particularly when you’re attempting to earn your ghost-wolf pack, are poorly thought out. For 800 MS Points ($10.00) fans of the series will find value, although you may be better off to wait for the entire Tyranny of King Washington DLC to release and play through it all, rather than piecemeal, in order to understand the full scope of the story and get maximum enjoyment out of it. Of course, the untold story still remains to be seen in the coming months.

Previous ArticleBonnie Franklin, 'One Day at a Time' star, dies at 69Next ArticleCasimir Pulaski Day, aka world’s most indie holiday, in food, freedom and fun