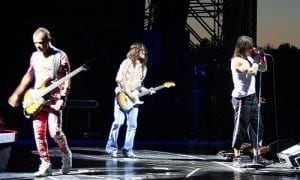 The Red Hot Chili Peppers have scheduled US tour dates for their upcoming tour, “I’m With You.”

The Red Hot Chili Peppers, currently in runs of shows in the U.K. and Europe, have announced that they will begin their first run in the U.S. in more than four years, according to MTV.

The tour’s debut show is January 25 in Charlotte, North Carolina. As of now, only six shows have been revealed, but a spokesperson for the band hinted at more shows appearing in the following weeks.

Tickets go on sale December 3. The tour will be to promote, the Red Hot Chili Peppers 16th album, “I’m With You.”