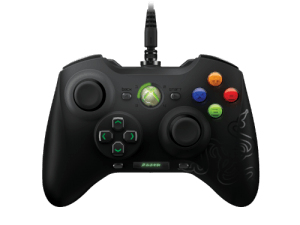 Total control at your fingertips … all of them!

One of the greatest advances for our current generation of Xbox is the controller itself. A marvel of ergonomics and efficiency, Razer is taking a unique approach with their own variation of the controller. The Razer Sabertooth is the follow-up to their previously released Onza controller and after hearing the feedback for the Onza, Razer has made engineering changes that any Xbox gamer can relish. While the general design has stayed somewhat similar to its older brother, the Sabertooth has finally given gamers a reason to step away from the Xbox licensed controller without having to fear a reduced gameplay experience. In fact, the Sabertooth has implemented enough changes that users will have an advantage over anybody not wielding one.

Because Razer has already released an Xbox controller that, while unique and beneficial in some ways, was not as comfortable and felt uncomfortable compared to the officially licensed controller, it’s hard not to compare the two. For instance, the face buttons (A, B, X & Y) have been elevated to allow for a more pronounced feel when pressing them. The tell-tale spring-like feedback and audible click is still there, which simply adds to the unique overall feeling of the controller. Additionally the thumbsticks have been modified, much to the appreciation of anyone using Kontrol Freeks. With the Onza the thumb sticks were widened to accommodate big thumbs, but the Sabertooth has brought them back to standard size and actually includes some custom grips to allow for maximum adhesion.

Still included are additional buttons between the triggers and the shoulder bumpers, but thankfully the size and positioning of these have been altered as well. With a shorter, wider design and reposition to a more accessible spot on the controller, users won’t have to worry about accidentally pushing the modified reload setting instead of tossing the grenade that was intended, for instance. The final, most recognizable modification to the Sabertooth are the buttons located on the underside of the controller. Using the natural ergonomics of your hands, users can access four additional buttons with their middle or ring fingers, depending on how the controller is held. The buttons underneath are initially semi-circles that fit the contour of your fingers, allowing for simple movements of up or down to act as another button on the controller. Users can also remove the semi-circles in favor of a “bar” that acts the same way, but is less noticeable.

All of these extra buttons might seem a little overwhelming, but the simple customization provided takes the confusion and makes it stress-free. By using the small OLED-panel, users will easily navigate to the option for customizing a button, then map the custom button to whatever they prefer. To prevent cheating and potentially being banned from Xbox Live, setting multi-button press macros is not allowed. That doesn’t mean the controller is any less useful though, as genres like shooters or fighting games evolve into an experience that, while certainly requiring players to learn and grow accustomed to the new setup, will enhance the experience by making particular movements and actions far easier to perform.

The Sabertooth allows for two separate button profiles, includes a 10’ braided cable, independent D-pad controls, a carrying case to protect the device when traveling, and works with the Xbox 360 or PC. While it certainly feels and acts differently than the controller players have grown accustomed to, when a little time is spent with the device and the configurations are mastered players will find that a clear advantage is given during its use. With a retail price of $79.99, it’s more expensive than the officially licensed controller, but the added features more than make up for the increased price.