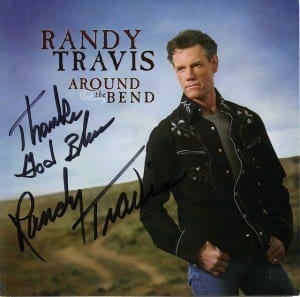 Randy Travis was arrested Tuesday for an alcohol-related offense near his Texas home. The Grammy-winning country singer had wrecked his Pontiac Trans Am and was found at the scene naked and combative.

Randy Travis, 53, was taken into custody after refusing to give a breath or blood test for the presence of alcohol and threatening “to shoot and kill” the officers conducting the arrest.

The sheriff’s office received a 911 call at 11:18 p.m. Tuesday alerting them to a man seen lying naked in the road west of Tioga, the home of Randy Travis, approximately 60 miles north of Dallas.

The Grayson County Sheriff’s Office released both the 911 call and mug shot of Randy Travis Wednesday. In the mug shot, Randy Travis appears battered, with a black eye and dried blood on his face.

The 911 operator asked the caller, “Do you think possibly he could have had a wreck?”

To which the breathless caller responded, “I really am scared,” and “I want to stay in [my] vehicle.”

According to the troopers who responded to the call, Randy Travis had driven off the road and struck several barricades in a construction zone. When asked by The Associated Press how the singer suffered the abrasions to his face seen in the mug shot, Tom Vinger, a Department of Public Safety Spokesman, responded in an email, “I know the vehicle suffered significant damage to the front end during the wreck.”

Grayson County Sheriff’s Sgt. Rickey Wheeler has said that Travis faces charges of retaliation or obstruction in addition to the DWI charge.

“Travis had a strong odor of alcoholic beverages on his breath and several signs of intoxication,” a statement from the sheriff’s office said. “While Travis was being transported, Travis made threats to shoot and kill the troopers working the case.”

Randy Travis walked barefoot from the county jail in Sherman wearing scrubs and a University of Texas cap after being arraigned and released on $21,500 bond Wednesday morning.

According to District Attorney Joe Brown, who spoke with The Associated Press, the felony retaliation charge carries a maximum penalty of 10 years in prison and/or a maximum fine of $10,000 and will be referred to a grand jury within a month or six weeks. According to Brown, the misdemeanor DWI charge could be filed as soon as prosecutors decide whether to proceed with the charge.

Tuesday’s arrest marks the second time Randy Travis has been charged with an alcohol-related offense this year. In February, Travis was cited for public intoxication after being seen in a vehicle parked in front of a church in Sanger, approximately 20 miles from Tioga.