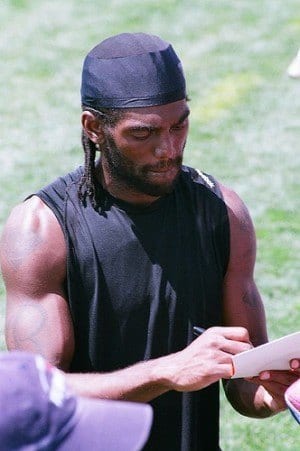 Randy Moss will get another chance in the NFL after reaching a deal with the San Francisco 49ers for a one-year contract. Moss was seen Monday practicing with team and coach Jim Harbaugh participated.

Randy Moss, who had other prospects opportunities with the New Orleans Saints, spent a full season outside the game after ‘retiring’ from the New England Patriots.

This recent acquisition by the 49ers will definitely help a squad which had a one lousy catch for three yards in their 20-17 NFC championship loss to the eventual Super Bowl champion New York Giants.

Jim Harbaugh has stated that he is impressed with Randy Moss and his football IQ. “Moss is so aware and innovative in the film room that he could have a career as a coach after he’s done playing, several former teammates have told me,” said Steve Wyche at NFL.com. Not to mention Randy Moss holds the record for most touchdowns in a season (23 in 2007). The same guy who has had over 1,000 receiving yards over 10 seasons.

Randy Moss is a low-risk move with a potential for high-reward. Moss might not have been the hopeful savior for the New England Patriots with arguably the worst season of his career, but the deal with the 49ers is one deal that allows them wiggle room. San Francisco, even if Moss doesn’t put up the numbers he used to, will still diversify their offence, and by just being there, Randy Moss is a threat.