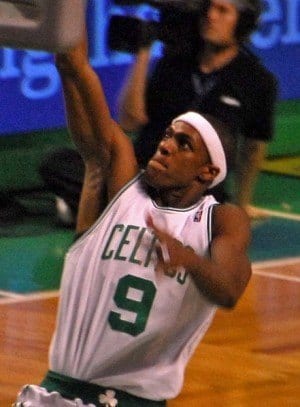 Rajon Rondo led the Boston Celtics to victory this Sunday with a 115-111 victory over the New York Knicks.

Overtime gave Rajon Rondo time to shine; he collected five points, five rebounds and two assists in the extra period. The player had his second triple-double in three games, finishing with 18 points, 20 assists and 17 rebounds.

It was Rondo’s fourth triple-double this season and the 17th of his career.
According to the Elias Sports Bureau, the last player to record a triple-double with at least 17 in each category was Magic Johnson, who had 24 points, 17 assists and 17 rebounds on April 18, 1989. The last player to exceed Rondo’s performance in each category was Wilt Chamberlain, who had 22 points, 25 rebounds and 21 assists on Feb. 2, 1968.

Paul Pierce scored 34 points, including a 3-pointer with 4.9 seconds left in regulation. Kevin Garnett had 18 points and 10 rebounds, and Ray Allen gave the Celtics the lead for good with a 3-pointer to make it 108-105, then followed it with a fast-break layup — both on assists from Rondo.

“That’s the Rondo we like to see, playing with all that energy,” said Pierce “He got the guys the ball in open spots; he did everything for us tonight. He rebounded, he passed, he got the clutch rebound there in overtime and got the layup. That’s the Rondo I like to see.”

Rumors have been circulating about Boston trading Rondo; although, Celtics general manager Danny Ainge has stressed that he is not actively shopping the starting point guard.